Pop Haydn performed on the streets of Melody Ranch, Gene Autry’s famous ranch and film set at the annual Santa Clarita Cowboy Festival. Pitching his Miracle Oil and demonstrating the shell game for all the Old West fans. 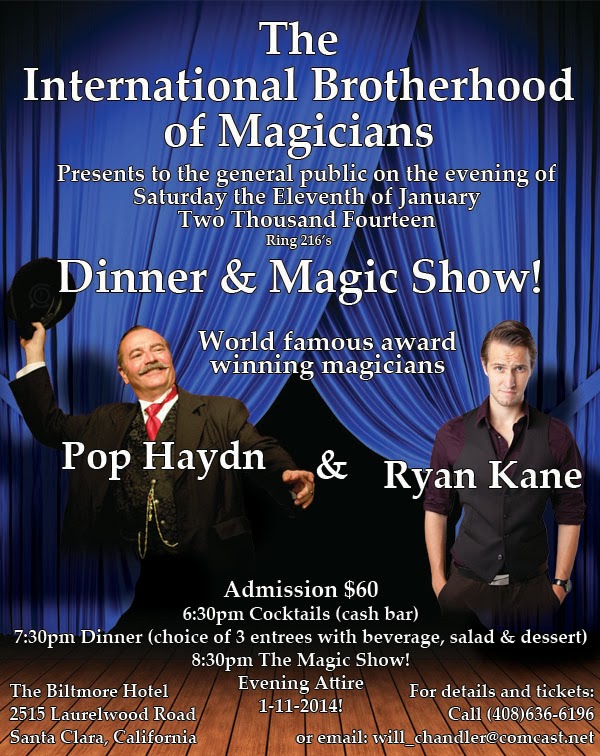 At the Magic Castle, it is well-known you can’t have your cell phone, i-pad or other devices on during a show. You cannot take photos or videos. No texting. These rules are posted at the front door, and repeated in each showroom at the beginning of each show. It is increasingly hard to enforce.

Do people in your audience stay connected to the internet during live performances?

Do you try to stop it? Encourage it? What do you think?

What is changing in live performance?

The Pop Haydn show in the Palace of Mystery at the Magic Castle last Spring tried a different tack:

We may be moving into an era when people are always with divided attention. In vaudeville, the audience talked, ate food, walked around, sometimes threw stuff. Our audiences may be more like that in the future, and less like the passive movie and television watchers…

Sometimes, people are tweeting to their friends what a great show they are watching.

People will be secretly videoing shows with their cameras–this will be streaming online at the same time.

It is a new world.

Are we planning for it?

What was a Shakespearean audience like? Quiet and respectful, you think? Or rowdy hecklers?

I don’t think this is going to change. The distracted audience–half here/half connected to the online world–is here to stay.

It is the new reality. People will not go to events where they must disconnect from the hive. Live entertainment may need to incorporate and accept the presence of distracted audiences.

We need to learn to deal with it and to use it. I think we ought to develop strategies to take advantage of it.

“Say something nice about us on Twitter!” “You can buy that right now at…” “If you were to Google magnetized water…”

Perhaps live shows need to find a way to incorporate the digital world, rather than trying to fight its encroachment.

We may be applying the standards of the second half of the twentieth century to the situation we are in here in the 21st.

Do we learn to take advantage of the new “expanded” live, or do we try to force a new and different audience into an old bottle?

If we want to reach the younger audience, we will have to bend to do it–I think they will not go to live entertainment if they have to cut their umbilical cord to the online.

I noticed that only a couple of people in each audience actually utilized their devices, but when we told the audience to light up their I-phones if they wanted, the reaction was almost always clearly pleasant and relieved. They get tired of being lectured and told to do things–especially at the Castle where they get it in every showroom.

What is the alternative?

Here Disney is using the Second Screen concept to give everyone in the theater an app that allows them to interact online during the movie.

What ways might we be able to use the internet to enhance our live performances?

The show has to be designed to accommodate this. You can’t do the same kind of things as you did in a darkened house. This really has to be a “second screen”–one that enhances the experience of the live show and extends it into the after show.

I think the idea of a passive audience, quietly sitting in the dark with their full attention on the stage is going to be more and more rare. It will be a special thing like Jazz or Opera–for a more disciplined audience. The world of live performance is going to increasingly be an interactive happening shared online in real time. We need to think of ways to adjust and benefit from these changes.

Live show business will be immersed in the online world. We should be looking for ways to take advantage of it, not shut it down.

This is a tissue of lies!

Don’t be deceived, folks! This is not the real Sphere of Destiny, and I can prove it!

I am in possession of the true Eye of Cleopatra. It has been under my protection for a long time.

One day I will tell the whole story–a story you won’t find in any history book!

Here is the one, true Sphere of Destiny, and the Conlin Collection is making a huge mistake not to listen to my offer…

Pop Haydn with the Sphere of Destiny


Pop Haydn pitches the Amazing Miracle Oil in the Palace of Mystery at the Magic Castle.

Something Brand Spanking New in the 21st Century!

Pop Haydn in the 21st Century! is coming to Magicopolis.

This show, presented March 7th and April 4th in Santa Monica, will demonstrate three Steampunk/Magical devices…but unlike most artistic “replica” devices, these all actually work under scientific test conditions.

This is new for Steampunk, and new for Magic. These are not boxes that do magic, these are magical devices that have histories and stories that are untold in the show, and can only be hinted at:

The Tesla C-2000 a highly modified version of a Tesla Coil, which bends the force of gravity in such a way that a 110 pound girl can withstand with one hand the full weight of any large man in the audience and can not be lifted barefoot from the floor by anyone in the audience.

The Sphere of Destiny, also known as Cleopatra’s Eye, which will answer any question the audience dares to ask with deadly accuracy and insight.

I have followed Steampunk for some time. I was a featured performer at the World Steam Expo in Dearborn for two years. I was a panelist on Steampunk at Stan Lee’s Comikaze Expo, and was featured in the book Steampunk Gazette. This is something new in Steampunk.

We have live music, magic, comedy, and the wonders of radio-magnetism.

It is not a reenactment of vaudeville, the medicine show or anything else.

It is History being made in the Present.

Hope you can make it!

It is going to be a hoot!

Tickets can be purchased HERE

Pop Haydn and the Sphere of Destiny

Pop Haydn to demonstrate power of the Sphere of Destiny

The Sphere of Destiny

Pop Haydn will demonstrate the amazing power of the Sphere of Destiny at his show at Magicopolis in Santa Monica, California on March 7th and April 4th.

The show is called Pop Haydn in the 21st Century! and features the magic and comedy of Pop Haydn, along with the Old Time music of Professor Dave Bourne and The 21st Century Boys, the sexy fire magic of Sophie Evans, and our Louisiana Songbird, Bonnie Gordon.

The Sphere of Destiny will answer questions from the audience about personal issues of health, success, happiness, lost objects, and so on, and will both predict the future and reveal the past. Don’t miss this uncanny 21st Century demonstration of 3000 year-old technology.

Coming to Santa Monica in the 21st Century!

For tickets: Pop Haydn in the 21st Century!