Pop Haydn’s birthday is on July 19th this year, so Pop is celebrating by offering $5.00 OFF on each of his two favorite routines — The Mongolian Pop-Knot and the Four Ring Routine.

Sale is good until July 31st. 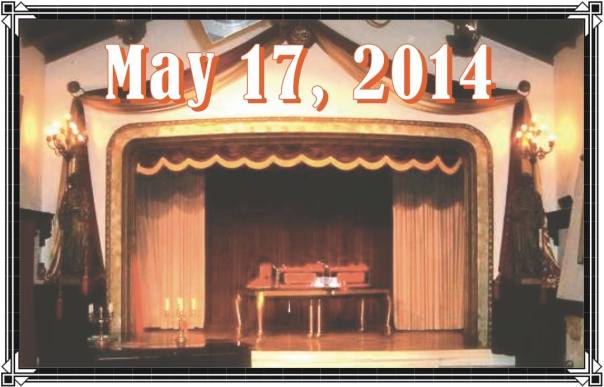 We are SOOOOOO close to reaching our goal!

THANK YOU to EVERYONE who has supported the Brookledge Follies by backing or boosting this project. I am deep touched by the outpouring of love, enthusiasm and encouragement. We have set the date for the Brookledge Theater Grand Re-Opening next year: May 17, 2014.

My goal is to have all of the work completed by May 8, 2014. That is the anniversary of my dad’s birthday, and this will be our gift to him… and to everyone who loves Brookledge. Thank you to all. Truly and deeply. xoxoxo

Pop Haydn in the Parlor of Prestidigitation

I will be performing the early shows in the Parlor of Prestidigitation at the Magic Castle in Hollywood all this week, beginning tonight. I have twice won performer of the year in this room.

Here is some video of a previous performance:

The Teleportation Device — Pop Haydn in the Palace


Pop Haydn performs his original routine, the Teleportation Device in the Palace of Mystery at the world-famous Magic Castle in Hollywood.

Pop Haydn is a character…

The Pop Haydn character is maintained in a loose way. People in the audience know that whatever the Pop character may be, that I am not actually a thief, conman, scientific genius, or a real medicine pitchman, and they know that I am not really transported here from 1910. But they mostly assume that I am an old, eccentric gentleman from the South.

I am all those things, but not like Pop, not with the wild expressions, mannerisms and thick archaic, Old West influenced accent that Pop has…If I dropped the character’s mannerisms, voice and accent, people would be a bit shocked, and disappointed–like taking the head off Charlie McCarthy.

They play with Pop both on Facebook and Twitter, engaging him in character. They make fun, saying, “It would be just like you, you old humbug.” “Did you steal their…” “So what was Tesla like?” All the time, they know it isn’t real, and they go in and out of the play. “Did you get that show?”

This is much like Jack Benny. People felt safe engaging him in his onstage character. “You really are as thrifty as they say!” “Thank you.” To have a magic character that has handles like this for the public to use is very rare in magic.

I think young people today, especially, have much more facility at engaging in fantasy than when I was young. It may be role-playing games, steampunk and cosplay. For whatever reason, they easily move in conversation and on the internet in and out of play mode. It is this interest and ability at role-playing and make believe that I saw in younger audiences that led me into assuming this kind of character basically 24/7. It has been a big undertaking that has been a work in progress for eight years.

I find that the “handles” give the members of the audience a way to interact in the performances that is more spirited and playful. The audience becomes fellow actors in an improv play led by Pop.

They seem willing to engage my character in a pretend mode in a way that I never saw before with my other characters. It may be that Pop is just such an Archtype character, instantly recognized as the pitchman, conman, huckster, marketer, liar, politician that he is–he is Elmer Gantry, Citizen Cain, Soapy Smith, Professor Marvel and all of Madison Ave at once, revealed as the medicine show huckster/opportunist he really is. The costume and manner of speaking is recognized by people in countries all over the world.

The great thing is, that the internet gives us ways to create and enlarge our off-stage characters in ways never before available to us. I can “play” with people online in character, and create images and video that help construct the character in people’s minds, so that when they “see” the character on stage, his backstory and images from other sources builds anticipation, and colors and enlarges their appreciation of the show.

That at least, is my intent.

Pop Haydn to demonstrate power of the Sphere of Destiny 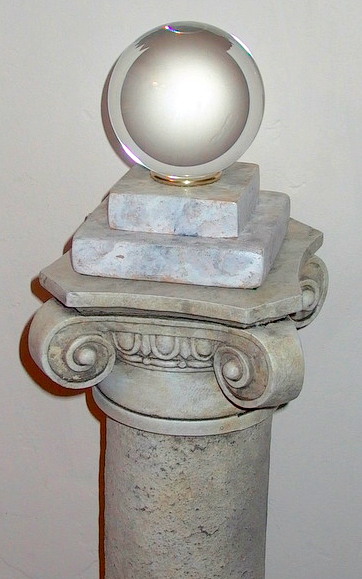 The Sphere of Destiny

Pop Haydn will demonstrate the amazing power of the Sphere of Destiny at his show at Magicopolis in Santa Monica, California on March 7th and April 4th.

The show is called Pop Haydn in the 21st Century! and features the magic and comedy of Pop Haydn, along with the Old Time music of Professor Dave Bourne and The 21st Century Boys, the sexy fire magic of Sophie Evans, and our Louisiana Songbird, Bonnie Gordon.

The Sphere of Destiny will answer questions from the audience about personal issues of health, success, happiness, lost objects, and so on, and will both predict the future and reveal the past. Don’t miss this uncanny 21st Century demonstration of 3000 year-old technology.

Pop Haydn in the 21st Century!

Pop Haydn in the 21st Century! is a wonder-filled evening of fun packed with music, comedy and magic.

Pop will demonstrate the amazing abilities of the Sphere of Destiny, and answer audience questions about the future–about love, health, money and lost objects.

The show features the sexy, sassy excitement of our Louisiana Songbird Bonnie Gordon, the fire and magic of sultry sorceress Sophie Evans, and the good-time music of Professor Dave Bourne and the 21st Century Boys.

Pop Haydn will present Tesla Girl, who will bend the very force of gravity itself while immersed in the powerful radio-magnetic field generated by Pop Haydn‘s Tesla C-2000–a highly modified version of a Tesla Coil.

The show is a lot of fun and is geared toward an adult audience–but it is still family-friendly.

To purchase tickets for Pop Haydn in the 21st Century!

Pop Haydn to Lecture at the Magic Castle February 24th

Pop Haydn with his Teleportation Device

For Magician Members Only

With his own persona firmly in place, Pop will address the basics of acting, character development and the theater of magic.

He’ll speak on what magicians need to know about the actor’s craft to improve magicians’ performances and strengthen their magic.

Pop will also be performing in the Close-Up Gallery of the Magic Castle, Feb 18-24.

Coming to Santa Monica in the 21st Century!

For tickets: Pop Haydn in the 21st Century!