Pop Haydn and the Vanishing Train

How does a bill become a law?


How is the constitution supposed to work? How does a bill become a law?

Pop keeps abreast of the pulse of what’s going on…

With the campaign season fast approaching, I am doing my best to keep abreast of current affairs, trying to keep a finger on the pulse so to speak…
Events are moving fast with the Greater American Confidence Party, and it looks very likely that I, Pop Haydn, will be the presidential candidate for the Old Weasels.
I will be gathering information and keeping my eye on things as Magill and I travel around preparing for the campaign, meeting people, shaking hands, kissing babies and making promises–lots of promises.
We may be taking a trip to the Mediteranean next to see how things are going there…

Senator Mitch McConnell is pushing an amendment to the Affordable Care Act that would allow employers to deny coverage not just for contraception, but for any treatment whatsoever that they claimed was against their religious or moral beliefs.

This would mean that if you work for a Jehovah’s Witness, you may not have coverage for blood transfusions.

If you work for a Catholic, you may not get the benefits of stem cell research.

Meanwhile, I still expect them to make Quakers pay for military expenditures–even though they are pacifists and supporting war is against their moral conscience, and Catholics have to pay taxes for wars their Pope has called “immoral” and “unjust”–wars that are, or should be, against their religious conscience:

“In March 2003, just hours after the first American cruise missiles slammed into Baghdad, the Vatican proclaimed the nascent conflict a “defeat for reason and for the gospel.”

“It was a war, said papal confidant Cardinal Roberto Tucci, that was “beyond all legality and all international legitimacy.”

Do we really want to allow people to choose which taxes or public fees violate their individual consciences, and refuse to pay that part of what they owe to society?

During the Vietnam War, many tax resisters went to prison for refusing to pay taxes for an “unjust war.”

Where were the religious of conscience then?

There are still free campaign kits for Election 2012 available, folks!

Get ‘em while they are free!

You get a Pop Haydn campaign button, a campaign poster Postcard, and a Greater American Confidence Party membership card.

Now we can’t keep this offer up for very long (the button alone sells for $3.25 in our online store) but we want to give everyone a chance, and don’t want to put up with the whiners who come back saying, “Why didn’t you tell me you were going to quit giving stuff away free?”

So this is your chance. All you have to do is sign up on our membership list at the GACP Online Headquarters

Don’t be a loser!

At least go look at the page to find out what this is all about.

You don’t want to be the last one to know, do you?

Help strike a blow for the thin “Sanity Fringe” of American politics. 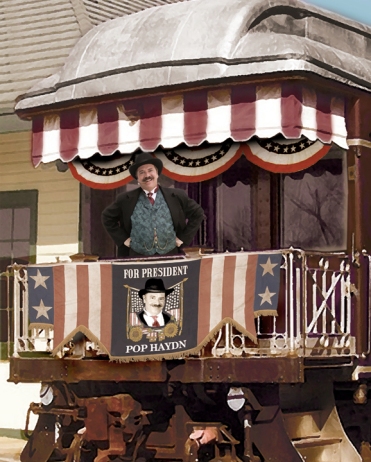 To get you in the mood, here is Pop’s new campaign theme, by Professor Dave Bourne:

You can find Dave Bourne’s CDs and more information about him at: www.SaloonPiano.com

Where did Google go?

Our New Mascot -- The Weasel

The election for the Greater American Confidence Party mascot has ended. The Weasel is the victor. From now on, we in the GACP will be represented by a weasel. Thanks for all of your participation. Finally, we can move forward as a party to victory!

Next we will have to choose a candidate for president of the United States.

I humbly put my name up for consideration.

The results of the month-long poll:

Who should be the mascot for the American Confidence Party?


We have had a number of wonderful suggestions for a mascot for the American Confidence Party.

We have taken the top ones to put in this poll, so we can let the people decide.

We want a mascot that reflects the values and beliefs and character of our party.

Please take a moment to check one and vote.