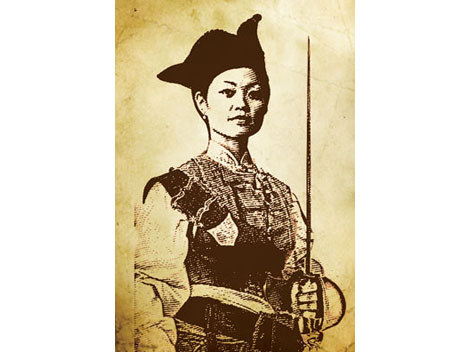 Ching Shih(郑氏) was a famous female pirate in late Qing China. Ching Shih’s real name is unknown as is where she was born. She was born in 1785.

In 1801, before becoming a pirate she was working as a prostitute on one of the city Canton’s floating brothels. It did not take her long to leave this unfortunate profession and marry a notorious pirate, Zheng Yi. They married in 1801.

Zheng Yi was part of a family that had been very successful in pirating.

After their marriage Zheng Yi gathered together a coalition of the competing Cantonese pirate fleets into an alliance. Within a few years the coalition was a force to be reckoned with and one of the most powerful pirate fleets in all of China. The pirate fleet was known as the Red Flag Fleet’.

Ching Shih was widowed in 1807. She maneuvered herself into her late husband’s leadership position. At this time in history it was quite something for a woman to be in the top position. She led over 1500 ships and over 60,000 pirates.

Women today lead things all the time, are heads of companies and love power. But instead of being boss over tame men and women, with the occasional office weirdo, all in business suits and high heels, imagine bossing around grimy, toothless, smelly, violent men who are underfed and on the water for months on end?.

In 1810 she had had enough of life on the seas, violence and filth and took an amnesty offer from the Chinese government. Stepping back from her position, she kept her loot and got married to her adoptive son Cheung Po Tsai. Not one Under her leadership cultural dominance was taken by the fleet over many coastal villages. On occasion they would even tax the people and enforce levies. Ching Shih and her fleet were known to rob markets, towns and villages from Macao to Canton.

After she retired from piracy, not liking to be idle, she opened a successful gambling house.

Death claimed this Chinese history-making pirate at the age of 69 in 1844.

She was the real-life Dragon Lady.